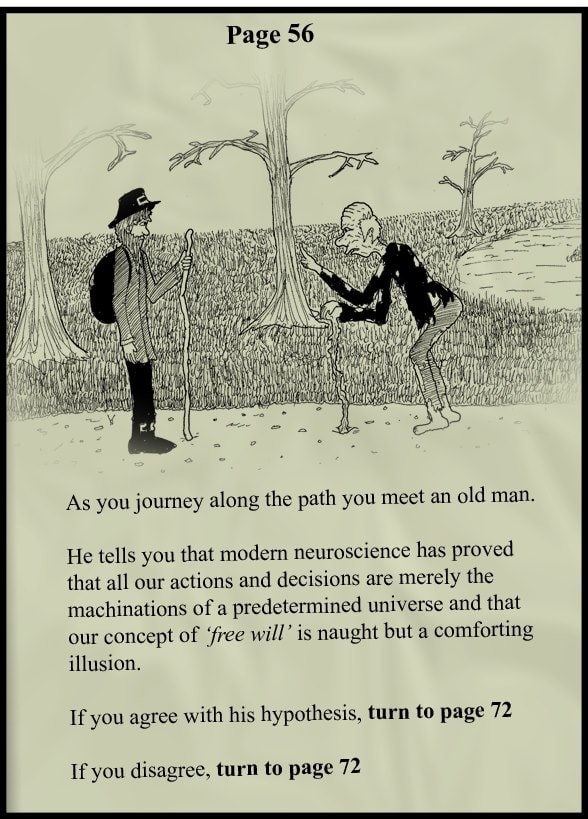 I once pointed out that most, scientifically minded atheists don’t believe in free will, and noted what one had said in a book. A few people remarked that I was just “quote mining,” which wasn’t really true—I just like to take notes while I’m reading, so I typically have them on hand.

Regardless, this picture is pretty amusing, and I hope you’ll find the following quotes of some value in considering what a world without a spiritual realm would actually look like.

-We feel like admiring people for what they do. None of us ever actually as a matter of fact says, “Oh well he couldn’t help doing it, he was determined by his molecules.” Maybe we should…

-Faith is one of the world’s GREAT EVILS, comparable to the smallpox virus but harder to eradicate.

-There is at bottom no design, no purpose, NO EVIL, no good, nothing but pointless indifference…We are machines for propagating DNA…It is every living object’s sole reason for being.

A conversation between Richard Dawkins and a comedian:

RICHARD DAWKINS: I feel as though I have free will, even if I don’t.

RICKY GERVAIS: Of course. And, you know, I’d say determinism is sound. But it is when they start making these leaps that we can’t be responsible for our own actions. Well, you’ve still got to lock someone up if they go around murdering people to protect the innocent.

RICHARD DAWKINS: Yes. It wasn’t me that did the murder…it was my neurons and my genes.

RICKY GERVAIS: Of course. Yeah, it doesn’t work. There is obviously a little bit of that creeping into everything – responsibility, being adult about things. But yeah it doesn’t change a thing. I feel that I make my own choices, and if I don’t I certainly feel like I am choosing. So yeah it is not even worth worrying about. But yeah this thing that takes the art out of something or the humanity or the beauty – why? Why does it? It is strange.

-Given the state of the universe at one time, a complete set of laws fully determines both the future and the past. That would exclude the possibility of miracles or an active role for God….It is hard to see how free will can operate if our behavior is determined by physical law, so it seems we are no more than biological machines and that free will is just an illusion.

-Ethics is illusory. I appreciate that when somebody says ‘Love thy neighbor as thyself,’ they think they are referring above and beyond themselves. Nevertheless such reference is truly without foundation. Morality is just an aid to survival and reproduction…and any deeper meaning is illusory.

–Let me summarize my views on what modern evolutionary biology tells us loud and clear — and these are basically Darwin’s views. There are no gods, no purposes, and no goal-directed forces of any kind. There is no life after death. When I die, I am absolutely certain that I am going to be dead. That’s the end of me.

There is no ultimate foundation for ethics, no ultimate meaning in life, and no free will for humans, either.

-Man…his hopes and fears, his loves and his beliefs, are but the outcome of accidental collocations of atoms; no fire, no heroism, no intensity of thought and feeling, can preserve an individual life beyond the grave…only on the firm foundation of unyielding despair, can the soul’s habitation henceforth be safely built.

Sam Harris, famed neuroscientist, and one of the “Four Horsemen” of atheism:

-You are no more responsible for the state of your brain in this moment than you are for your height…thoughts simply arise in the mind. But the idea that we as conscious beings are…responsible for the characters of our minds, simply can’t be mapped onto reality.

-Some people in this post-Darwinian world still try to invest human beings with some special significance, as though they were important. But we now know that is not true.

-You, your joys and your sorrows, your memories and ambitions, your sense of personal identity and free will, are in fact no more than the behaviour of a vast assembly of nerve cells and their associated molecules.