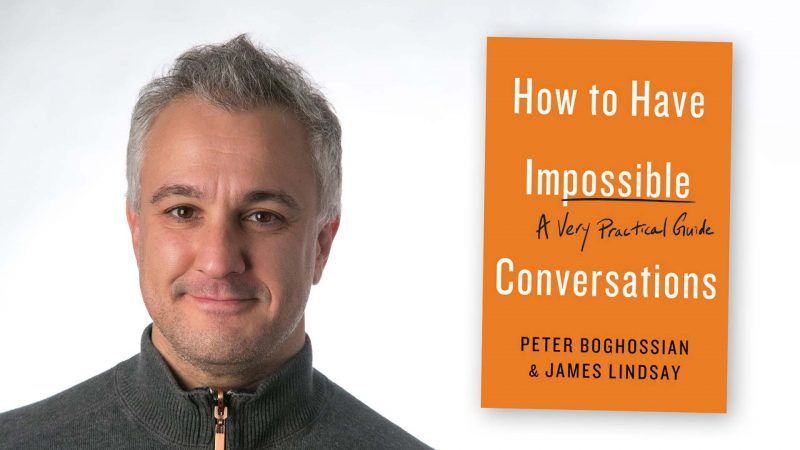 “How to Have Impossible Conversations: A Very Practical Guide” is a great book.* The authors have noted that academia (including the most prominent medical journals) is subject to an increasing assault whereby science is replaced by social justice. (They famously had a number of bogus studies, including one which won an award, published in academic journals to highlight this insidious trend.)

The authors are also concerned about so-called “virtue-signaling” and the inability to see beyond sociological horizons. That is, an inability or unwillingness to have conversations with people who we label as entirely incompatible with our own psyches. They explain that an ingroup is a social group to which a person psychologically identifies as being a member, and that, increasingly, people cannot see outside of their own echo chamber.

This seems to hold true in many matters, but especially of social activism or politics. It is my belief that we all need to be able to critique everyone, including those we support, as well as ourselves. A critique is a detailed look at both the good and the bad; it points out where one is doing well, as well as where one can use improvements. It is very dangerous to get to the point where one sees a critique as simply a criticism—that is, when one sees any mention of negative (as opposed to simply the good), as treachery or an outright assault. If we cannot or will not hold our own side accountable, we are already slaves, and all the worse for not having realized the shackles that have been placed on us.

A clue that this is happening is when we see someone point out a flaw or foible in a person or cause we support. If our immediate reaction is, “But the other side did worse,” or, “But imagine what it would be like if…” then we are already arming ourselves to fight a battle against betterment. We must be able to assess both the good and the bad, and this includes, at times, of entire “ingroups” of people.

I say this, because it is what God does. In Revelation, writing to different churches, he notes very negative things at times, but also points out where they are doing well, or points out those in the group who are showing signs of excellence. We should have the mind of Christ, that we might look upon both the good and the bad, in ourselves and others, and call it our fairly. We must not be afraid of moral improvement, nor unwilling to have “impossible conversations with terrible people.”

*Note: The authors have a great podcast on the Babylon Bee under the title, “Episode 15: How Social Justice Is Like Gremlins.”* For a PG-13 dialog about Dr. Boghossian’s fake academic research and the disturbing state of social justice affecting science, please see Reason.com‘s podcast, “How To Have Impossible Conversations in Terrible Times.” Boghossian and James Lindasy are featured in much more depth on the Joe Rogan Experience podcast, which is worth an R rating, but also highly informative and disturbing. Also see a recent Reason podcast which features two professors “in exile” for a deeper look at social justice’s potential for deleterious impact on science—Let’s Talk About Sex Differences with Christina Hoff Sommers and Debra Soh: Podcast.