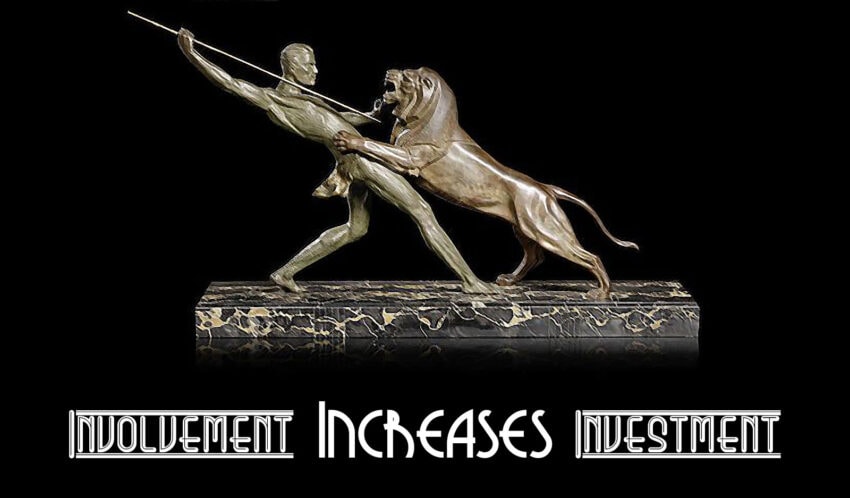 This is part 4 in a series.

It has been said that politics is a conspiracy of the unproductive but organized against the productive but unorganized. If you do not think this is true, read about the October Revolution of 1917 where Lenin and the Bolsheviks proved that a dedicated minority can gain absolute power over a disorganized, leaderless, indifferent majority.

This willingness to organize to spread a belief is the seat of power. We know that by speaking up, ideas spread across culture. What is wild at first mention is what “must just be normal” by the time your 10th friend has said it. By simply being present in society, all sorts of things become accepted, from pederasty in ancient cultures to eradicating Jews in more modern times.

If you don’t like how the culture around you is changing, it’s incumbent on you to speak up: involvement increases investment. The more you speak up, the more you normalize your own values, and the more you’ll have reason to actually live those values out.

In Christianity: I think that our churches are often hurt by the fact that most people don’t have opportunities for much involvement, resulting in a lack of investment. Preachers and pastors and deacons can handle the “needs of the flock,” not giving those within a chance to use their abilities, or grow them. It becomes a kind of repetitious, one-sided talent show that lasts only as long as it takes to check off all those boxes that make Sunday “officially completed.”

Figuring out how to change our assemblies so that “each one has a contribution to build up others,” (1 Cor 14:26) will result in a much more engaged church, doing more good in the world, standing stronger, and having deeper relationships. The more we’re a part of an actual social club, the better we’ll do, because people are very lonely.

In Society: There is a Persian word, “kitmān,” which means a practice of maintaining an outward appearance of Islamic orthodoxy while inwardly dissenting. The man who refuses to speak becomes trapped in his own mind, a victim of voluntary kitmān, until who he really is dissolves completely into the past.

If you have moral principles and convictions, you must live by them, and be willing to speak out as to why you live your life in such a manner. If you do not, your life amounts to nothing and is in fact possibly worse than that, because you’ve really just become an aging actor.

A child who is very dear to me was recently told by her public school teacher that she wasn’t allowed to talk about God, because “we don’t talk about that sort of stuff in school.” I was so proud of this little kid, and so angry at the system we’ve made which tells people to become actors trapped in their own minds, scared to speak what they truly believe!

Yet speaking up is what we must do if we are to have hope. “But having the same spirit of faith, according to what is written, “I believed, therefore I spoke,” we also believe, therefore we also speak.” (2 Cor 4:13-14) It won’t be easy, sure, but it will free you from the shackles of conformity. Consider the famous story of the Emperor’s New Clothes. Imagine being the people, forced Live by Lies, all due to the pressures of society.

This is no mere fable. In the Asch Conformity Experiments, researchers gave a reference line and had people then pick which line matched the same length as the reference. Everyone but the test subject was actually a paid actor. The line selection would be repeated numerous times, and on the last time, the actors would all, in view of the actual person being examined, all pick the same, wrong line.

Overall, 75% of participants were willing to also select the absolute wrong answer. Asch put it this way: “That intelligent, well-meaning, young people are willing to call white black is a matter of concern.” Now realize how much worse society is, because society doesn’t just select an answer and say nothing, as in the experiment: society projects reasons that you need to comply with the incorrect selection or be declared an outcast. Society will tell you that you don’t belong or are crazy for not selecting the wrong line. Society will tell you that all smart people select the wrong answer.

Society will also amplify answers that it likes while ignoring ones that it doesn’t. Consider that much of our modern society defaults to a “conflict” view of religion and science. You can hold to one or the other, but not both. Or you can hold to one, but it will neuter the other. Yet this is more of a philosophical standpoint than anything else.

And we can see this in reality. George F.R. Ellis is perhaps the brightest cosmologist that the world has ever seen, having won awards for his science and his humanitarian efforts. Along with the late Stephen Hawking, he wrote, “The Large Scale Structure of Space-Time.”

Ellis is a theist, while Hawking died an atheist. The divide between the two men came not from their science, which was the same, but their worldview.

Or consider Francis Collins who headed the Human Genome Project after taking it over from his predecessor, Jim Watson, and has gone on to be the Director of the National Institute of Health.

Collins is a theist, and Watson an atheist. The divide between the two men came not from their science, which was the same, but their worldview.

There are scientists on both sides, and the “conflict” view of science and religion is a statement of personal philosophy, but it is not a statement of a fundamental truth of the universe. Now if those who believed in God refused to speak up, instead Living by Lies, it would become a truth.

And thus we must speak. The more you speak, the more you’ll become what you say, and live out who are you supposed to be.

God does have a plan for you, and it involves being active in your church. It involves speaking up and spreading the gospel. It involves not being an actor, but rather a doer of convictions; being the real McCoy.

It involves putting yourself, your relationships, and your emotions on the line. Do you study the Bible with anyone? Do you proclaim Jesus? The silent, fruitless Christian is not what God has called us to be. We are not His holy bench warmers; we are His ambassadors.

And remember, involvement increases investment. Live Not by Lies.