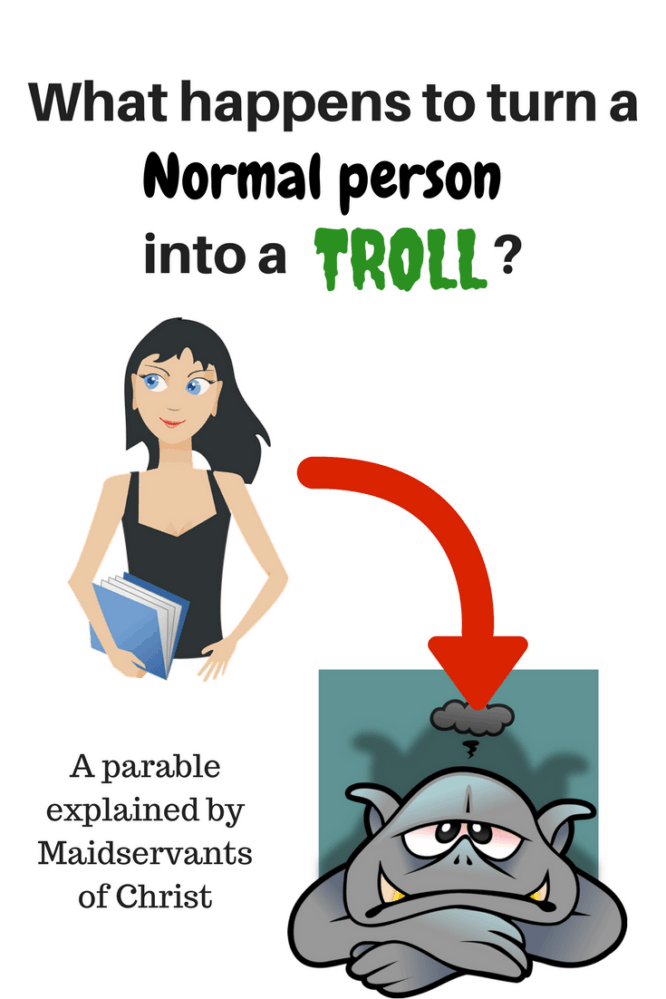 A disturbing trend I’ve noticed—especially online—is the decision to be neither charitable nor kind. It is instead replaced by a fervent love of anger and hostility. I hope that I’m not that way often, and please message me if I am; I promise I won’t bite. You see, I read a review of a movie recently, and in it, one cop said with some concern to another,

“It’s not healthy for you to scuff concrete as long as you have. You get results, but you’re losing perspective and compassion. A couple more years out there and you’re going to be a human steamroller covered with spikes and fueled by bile.”

That really struck me as worthy of my consideration. Certainly not to complain of my friends, for I am sure that I am guilty as well, but my Facebook feed has seen an uptick in online, human steamroller posts over the years; I’m convinced that it’s unhealthy.

To that end, for any Christians, I’d like to share an important parable. It’s taken from my sister, Helene, at her website, MaidServantsOfChrist, which you should visit.

The Parable of the Trolls

Once there was a Holy City with a single shining gate. Leading up to the gate of the city was a series of bridges.  Across the bridges came those who wished to leave the injustice, poverty and violence of the outer cities for the peace and joy that the great King provided.  Unfortunately sometimes the residents of the city were lured away by the promise of adventure, wealth or fun and left by those self-same bridges.

Within the Holy City itself were more bridges.  They were the vital thoroughfares that connected the people of the city. A very large and ornate bridge connected the Jewish and Gentile sections.  The people whispered the King’s son paid for this bridge himself. Other ancient bridges connected those who ate or didn’t eat meat and those who celebrated or didn’t celebrate certain holidays.  Hundreds of small bridges connected the peoples of different languages, cultures, traditions and consciences.
Within the city there was unity.  Until one day a strange thing was seen there.  Trolls.

They began as ordinary citizens of the kingdom, as beautiful as any other of the redeemed, but they were drawn to the bridges.  They appeared first at the outer bridges.  They warned those leaving the city of the dangers and horrors of the cities outside and the difficulty of journeying back to the Holy City. Disheartened by those who didn’t heed their warnings, their anger grew into hatred.   And that hatred, so alien to the citizens, began to twist their features. Soon they came to live not among the other citizens but under the bridge itself, terrifying those who tried to pass into the Holy City far more than those who tried to pass out.

Before long they also began to appear under the internal bridges.  Innocent citizens going to fellowship with their neighbors would be terrified by the trolls who jumped out from under the bridge.  The monsters began with a warning, but if the passerby insisted on crossing, things would escalate.  First there was name calling and then calls for damnation. Eventually the trolls began to insist those who fellowshipped with citizens across the bridge were not members of the Kingdom at all.  Every hurled word, every fearsome growl, every time they terrified others into submission, the trolls’ warts grew, skin darkened, as they became the evil they were trying to prevent.

By far the strangest thing about the trolls was the issue of the mirror.  Although any other citizen could clearly see their green skin, beady little eyes, and grotesque form, when a troll gazed in the mirror, all he could see was a knight in shining armor, grand defender of the Kingdom and its way.

The trolls weren’t alone by the bridges.  Citizen soldiers stood guard at the edges of the outer bridges.  They would take folks aside who wished to pass, warning them gravely of the danger.  In love and fear they tried to protect the members of the Kingdom from leaving its safety.  However, they also warmly welcomed those who wished to join the Holy City, serving as guides and friends to those coming in from outside.  Freely these volunteers crossed the bridges in the city to fellowship with all the citizens there.

Because of the trolls’ fearsome reputations, some terrible things happened. Although it all seemed a great puzzle to the loving and enlightened citizens, those who lived in “Pride of Life” and “Lust of the Flesh” and other outside cities began to believe that those who lived in the Holy City were all trolls.  Recruitment became more difficult and the city’s reputation and that of its King suffered.  Almost as bad, the city became more and more divided as the bridges fell into disrepair and the people in different parts of the city grew in their fear and ignorance of each other.

One day, the king came riding through the city on his white stallion.  He rode across every bridge in the city, touching every citizen, reminding them that all his people are washed whiter than snow. He stopped and gazed at the trolls.

And those who heard and loved the King, obeyed his commandment.  Their backs straightened; their robes shone white and they were reunited with the redeemed.  Those whose ears were deafened or whose hearts were too loveless nodded their heads at the king and crawled back under their bridges.

To see the explanation, check out The Parable of the Trolls Explained.