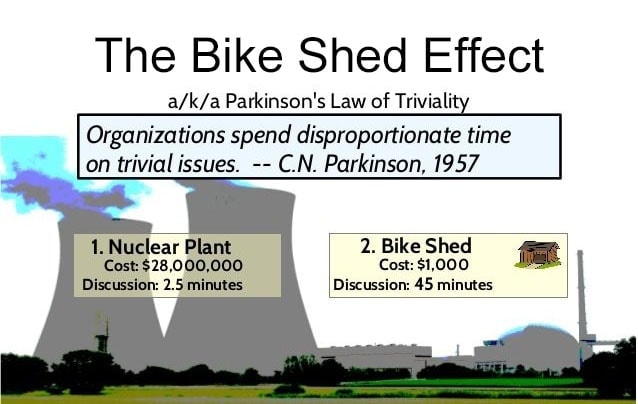 Why do we fight over little things so often? Sometimes we have to “read between the lines” in order to even find something to fight about, but then we choose that hill to die on. Have you noticed that? Parkinson’s Law of Triviality, also called the “bike shed effect,” notes that organizations focus on trivial issues and neglect weighty ones; that is, they give disproportionate weight to trivial issues.

C. Northcote Parkinson observed and illustrated that a committee whose job was to approve plans for a nuclear power plant spent the majority of its time on discussions about relatively trivial and unimportant but easy-to-grasp issues, such as what materials to use for the staff bike-shed, while neglecting the non-trivial proposed design of the nuclear power plant itself, which is far more important but also a far more difficult and complex task to criticize constructively.

As a Christian, I have to remind myself not to do that. Jesus chewed out many of the religious saying, “Woe to you…hypocrites! For you tithe mint and dill and cummin, and have neglected the weightier provisions of the law: justice and mercy and faithfulness; but these are the things you should have done without neglecting the others!” (Mt 23:23)

It’s easy to ignore weighty things. I can spend 5 hours fighting over musical instruments, but it’s a lot harder to get me to spend 5 hours living either of these out:

1.) “Pure and undefiled religion in the sight of our God and Father is this: to visit orphans and widows in their distress, and to keep oneself unstained by the world.” (Jms 1:27)

Or as I once noted to myself while throwing some money in the collection plate, “Why is it so much easier for me to give $20 than 20 minutes?” I fail at this often, being a master of bike shed design, but I’m getting better.