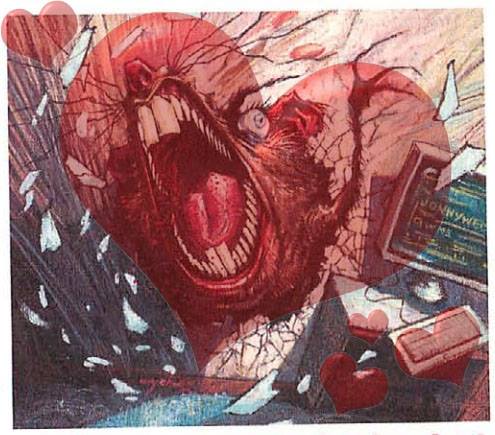 V-Day is on the way, and you’re tired of online dating. Let’s face it, even Jeffrey Dahmer and Hitler had a better love life than you. It’s time to up your game, and for only a small fee, I can help you out.

Like a greasy, cat-sized rodent trapped in your walls, the Valentine’s season has arrived, keeping you up nights as it skitters noisily in the drywall for two weeks before dropping dead and stinking up the house, forcing you to unintentionally and repeatedly rend its liquefying corpse as you fish it out through a wall outlet you pried off with the sharpened foot of a Barbie doll because you just can’t risk having a single Phillips-head screwdriver in the house after the “Cheese and Kitten Incident” of 2012.

To celebrate the single worst part of the year, you’re reminded that you’re single! I’d like to take this time to become a PR shill for you, becoming your own personal cupid, slaying your singleness by extolling your sexy womanstache or manwattle, wooing in your choice of lady or man in much the same way that any slimy anglerfish lures unwary, slow sea creatures to their doom.

Now I never wanted to work in marketing, especially not marketing YOU, but I’m up for the challenge. I’m no glad-handing, gregarious, quipping shill who can charm and con the public. In fact, one perkily perspicacious PR poo-bah once posited, “The cool thing about you, Lucas, is that you say what you think.” Which was her way of not saying what she thinks: “The thing about you, Lucas, is that your people skills are so atrocious, you practically qualify for disability.”

Yet somehow, in spite of an inability to sway people to my way of thinking without resorting to choloform, a good 23-minutes with a loving, EZ-Grip vegetable peeler, and a hatbox full of smothered squirrels, I have been converted into a shill—and just for you, at reasonable rates.

“A breathtaking, original ballet of love.” That’s the quote I came up with to describe a relationship that I rekindled with a woman, and it worked better than my original slogan one-week in which was, “So much like the first time, you may not notice the difference!”

But here’s the thing—the litter of loverpigs wanting all the inside scoop on this relationship ate that up like it was gourmet food at the last trough in a world of famine and despair, wisting optimistic, early speculation and presenting it as if it were a glowing endorsement of the final product. “Oink, snort, when will she finally meet the parents? Snot.”

Now, maybe you think I’m splitting hairs, but there is a huge difference here: It’s the difference between commenting on a baby’s ultrasound and the finished product. “Beautiful and full of possibility!” can easily turn into “Two heads means double the kisses!” when that joyous bundle is finally released.

Not that I didn’t like or wouldn’t recommend this girl. I mean I do like her, in much the same way as the sun: best enjoyed at a distance. And of course I’d recommend her! After all, even crocodiles mate. But what I’m saying is that I can increase your branding a magnitude of order over that little phrase! I mean, others would try and set you up with someone by saying stuff like, “She’s perfectly fine,” or, “I loved her a lot more than Marburg virus and, along those lines, can offer you some great survival tips!” Or maybe, “Every time she starts speaking I have to ask her to start over again from where I lost interest, which usually starts around, ‘Hey Lucas!”” But you’ll get much , morbid, possibly heinously salacious interest with the hot love-branding that I’ll get you, and yes, that might be literal and not just a word-image.

So let me work for you! Let me get you a date, up-selling you to the point that the likely disappointment becomes as utterly inevitable as the heat death of the universe. And if you want me to be a little more realistic about getting you a V-day date, I scale back easily and offer previews of your romantic night-out (as opposed to your former and only hope, involving a basement and expensive sound-sealing, followed by more time in federal custody than you’d like) liberally peppered with lots of exclamation points such as “Probably won’t totally suck!” and “Not the worst day in history, but excitingly close!”

So shall I compare thee to a summer’s day? No. No, I probably should not, considering the fresh air and sunlight-phobic nature you must possess to still be single at this advanced age in your life. I should probably compare you to someone with one foot in the grave.

For only $50*, I’m offering you the chance to have me hook you up with the man or woman of your dreams (keep in mind that you forget most of your dreams, so you can’t say for certain that this is not not not true), much to their detriment. By knowing you, sure, they’ll take more lasting damage than a late-stage leper playing dodgeball, but one man/woman’s emotional torture is another’s emotionally undeveloped version of affection. You’ve got your tough love, and then you’re got your un-stinking-believably barbaric, potentially criminal love, and guess which side of that splintery fence I’m on!

I look forward to your business.

*Payable in cash ONLY. Faceless transients, humans trafficked, and “those who will not be missed” are no longer accepted as valid forms of payment given the depressed state of the organ black market.