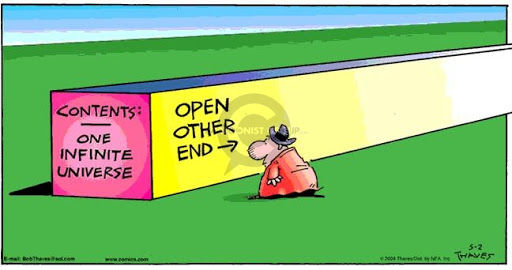 An infinite past universe is problematic in that we could never reach today; more specifically, an actual infinite number of past events is logically impossible.  On the other hand, if the universe began to exist, this is even more problematic. Still, some cosmologists will say that this infinite past is true, but try to circumvent the negative conclusion by re-stating the issue as such:

“Yes, you can’t form an actually infinite collection of things by starting at a point and adding one thing after another. [You’ll never reach the end, as with this very day being the “end” of infinity in the past universe.] You will never get to infinity. But what you can do is never start and just finish at a point. That way you can form an actual infinite by successive addition.”

Hopefully you can see why this is also untenable. If not, it’s easy to view this as a thought-experiment where we substitute days for events, as the basic logic is the same, so the reasoning will lead to the correct conclusion.

What this restated issue is akin to is a series of dominoes falling, and you see the last domino falling (today), even though before it could fall an infinite number would have to fall prior to it.

What you discover is that there is no point in past time at which the last domino would fall, because it would have already fallen prior to that. That contradicts the hypothesis that the dominoes have been falling for eternity.

This idea seems to me to be even more difficult than the idea of starting at a point and getting to infinity.