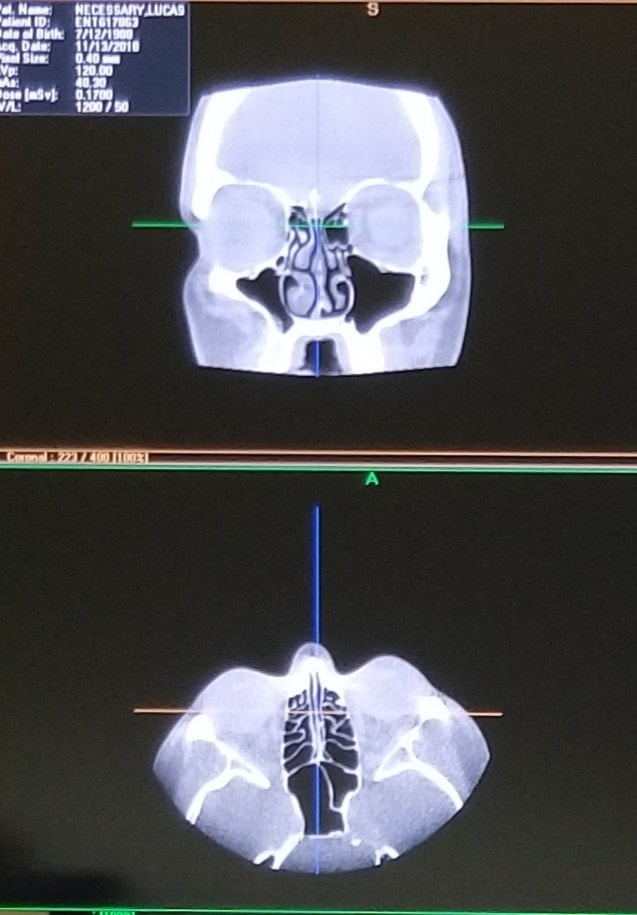 When I was a child, I pulverized my nose. This was not addressed, though primarily due to ignorance. As I grew older, the bones deformed more and more. Because it was so gradual, I eventually thought that the inability to breathe through my nose was simply a part of life. At night, I’d have to keep a gallon of water by my bed, because my tongue would get dried out multiple times during the night; I really couldn’t sleep for more than an hour at a time. This is the story of how this issue got fixed. It has graphic pictures so that people considering the same thing can be well informed.

Although all the physicians I would see every year remarked on my sorry shape, I thought it was just them being irritating. At some point, I started getting so many sinus infections and ear infections that it made travel difficult and painful. The urgent care noctors [sic] prescribed all sorts of antibiotics, sprays, and other things, but I was just constantly run down. Walking was painful, as each step hurt my mouth for some reason. Furthermore, I was always having nosebleeds.

I finally took it upon myself to go to the ENT, as I was getting sores all over my tonsils. I chose Dr. Martha Silver, as she had a 5-star rating. I instantly loved her, too. She was funny, inquisitive, and wore cowboy boots! She speculated that the sores might be due to me being an obligate mouth breather, and that the tonsils probably didn’t have to be removed. She thought that doing so would probably just be an unnecessary medical expense, but she did look up my nose, and remarked, “Well that’s the worst I’ve ever seen.”

In fact, she said that there was effectively total occlusion, so that she could not use an optical scope. Instead, we performed a CT, and it was pretty gnarly. In one portion of the nasal structure, the growing bone had dislodged early on, and was not connected to the “roof”, but instead curled back in on itself. Also, apparently people have small holes that lead to cavities in the skull; the bone had overgrown in mine, and these were not present. One section of a cavity had a noticeable growth, which also explained persistent maxillary pain on my right side. Lastly, my septum was obviously all jacked up, to use a medical term, and my turbinates had hypertrophied, too. She told me that surgery was my best option.  She thought that the following was appropriate:

-Turbinectomy.  In this case, partial removal of the turbinates.

-Septoplasty. Basically taking the nose apart on the inside and then putting it back together again in chunks.

-Uncinectomy and antrostomy. These seemed to be lumped together for me, though they were billed as separate procedures at about $10,000 each. I think it’s just punching holes up in that bad boy.

-Excision of growth.
-Irradiation of hypervasculature area. (My sinuses haven’t bled since.)
-In essence, I was receiving functional endoscopic sinus surgery (FESS) plus more!

She was incredibly helpful during the whole process, and agreed to get my surgery done quickly, as I was moving soon. Two weeks later (after my vacation to Belize), I showed up to the surgery center at 7, and by 7:30 I was all gowned up with an IV in my hand. By 7:45, I was being wheeled into the operating room, where Dr. Silver, Dr. Thor Hallingsbye (anesthesia), and another person were hovering over me. Thor told me that they were going to start the anesthesia, but he didn’t tell me to count down or anything. Instead, he just said, “Just so you know, this hurts some people, so don’t worry if you feel that.”

It did hurt, and I remarked, “Ahh, I like it! Feels like you’re pulling the bones out of my arms.” In reality, it wasn’t that bad, but it also wasn’t like my previous experience with general anesthesia, which was dizzying but pain-free and quick. I stayed awake for just a little bit as they held an inhalation anesthetic mask to my face, and then it was nap time.

Previously, when I had awoken from anesthesia, it had been gradual and fun for me, despite the surgery. (And less fun for the nurse, who claimed I was a jackass.) This time, at 11:37, I woke up abruptly, was in immediate pain, and began assessing my motor function with no delay, but found that it was significantly degraded. I couldn’t get my legs and arms to function appropriately, but I sat up and laboriously moved my legs to steady myself. I gently felt my face and found that I had both dressings and bandages, and was bleeding.

A nurse showed up as I began to sit up and said, “You’re awake? That’s earlier than expected. Let me get the doctor.” Dr. Silver then showed up and remarked that I was conscious more quickly than expected. She asked how I felt, and I told her, “Like my face is on fire and some of my skull has been removed.” She had the nurse administer some more IV narcotics, which I noted did absolutely nothing for the pain, and she said that they most often don’t really help with the sort of cutting and playing she’d been doing in my head. She explained that this was information that she doesn’t give out before surgery, as it causes undue anxiety.

Dr. Silver removed the bandages and dressing and noted that the bleeding wasn’t too bad, then remarked that I must have the highest pain tolerance that she’d ever seen, and again asked if I was OK. (Not sure why she was so concerned.)  I told her that I was happier than anything, because I could BREATHE! I don’t think that the nurse knew how to take that, because she said, “This…is an improvement for you?”

YES! YES! I could actually, no-kidding breathe. Hadn’t been able to in years. Dr. Silver briefed me on what to expect while I texted my buddy Henry LaViolette, who came to pick me up (and, by the way, his wonderful family had dropped me off, too). What to expect was:

1.) The interior of my face was being held together by splints. They had a design to keep the bones in place, prevent bleeding, allow air flow and irrigation, and to avoid allow the sutures to do their thing. Irrigation is important to prevent crusting, which can lead to tearing of the healing flesh when the splints are pulled out.

2.) Speaking of which, I had 17 sutures inside, and some of them might come out over time. (They did.) I could feel the sutures holding the splints in place as she was telling me this; they’d been tied together in one spot, which was very annoying. The intubation had been excellent and was not very noticeable. (My throat was not sore.)

She and the nurse recommended that I stay in the recovery area for some time, but I declined, citing my desire to be in pain in the privacy of my own home, given that my own home didn’t charge $XX,000 to simply exist in it. They found this amusing. About 15 minutes after waking up, I was being wheeled past the nurses station, and the charge nurse exclaimed, “You’re leaving? You need to stay longer,” to which I cheerily replied, “My faithful stead Henry is pushing me out of this place, and I’ve never felt better and worse at the same time!”

While she laughed, she also sent a nurse to watch over me until I was in Henry’s car. Nanny-state nurse! Henry didn’t seem to care for my antics, but he’s very prissy and prone to not liking people who are missing parts of their skull. It was just after noon, so the entire surgery experience had taken around 5 hours; the time in surgery had been longer than expected, so Dr. Silver didn’t get to the second surgery until after noon. (Although maybe she left and had breakfast while I was under.)

We went and got my narcs (which primarily made me sleepy, I’ll note, but didn’t make me nearly as barfy as hydrocodone does), and a concerned employee at the pharmacy approached me and asked if I was alright and if I needed medical care. I told him, “I don’t need an ambulance, but I do need to be high.” Getting the narcs took way too long.

Eventually I was at home, where I took my meds, sat up in my chair, and slept. The next week featured much gentle irrigation, bleeding everywhere I went (pools of blood in the bathroom), and very little sleep. I still loved it, though. Those narcs (whatever they were) were AWESOME. I’d take them, my legs would feel like they weren’t there, and then I’d be asleep. Two hours later, I’d wake up feeling refreshed. NEVER SLEPT BETTER! May our Lord ban hydrocodone and replace it entirely with whatever those puppies were.

The next week, I went back and had the splints removed. Some women have claimed that this is worse than childbirth. I don’t know about that. Some women have claimed that the *surgery* is worse than childbirth, too. Who knows. I do know that the sutures being removed (some of them, not all) hurt, and that the splint being removed wasn’t pleasant. I also bled like nobody’s business. This led to more stitches coming out, too, other than the ones that were snipped. Oh, and when those were removed, they were pulled out with tweezers…through the middle of my face, as it was stitched all the way through! Gah! I have a big nose, though, which really helped. Dr. Silver complimented my excellent irrigation, and said that they run into problems with folks who don’t do it well, as the splints kind of fuse in there like concrete.

Below are pictures of various things that will exit your body at inconvenient times in the next week or two. Keep paper towels handy.

Two weeks later, I blew out a bunch of the medical packing while bathing, as I’d been told might happen. It was fantastic, and I developed this weird, awesome sound….AIR FLOWING THROUGH MY SINUS CAVITIES! I still do it to impress the girls. “Hey baby, listen to the sound of this breathing!”

Since getting the surgery, I haven’t gotten sores on my tonsils. My stamina has improved, and I don’t have pain in my maxilla. I’ve had no ear infections, and while I’ve gotten a couple of sinus infections, they’ve been minor, not painful, and quickly over. Like a day or two…and no pain! Plus, I can irrigate my nose and blast all the goop out. It’s like a really gross magic trick.

Best money I’ve ever spent. It did cost well over $40,000, but that was alleviated a great deal by insurance. If I’d only had the septoplasty, it would have been much cheaper. (About 10,000 I think.)

Also, my nose is slightly straighter, and I didn’t have to have followup surgery or radiation, as it was supposed I might.

If I could have a million dollars but never have had the surgery, I’d have turned down the million.

2 thoughts on “Rated R and 5 Stars: Septoplasty and More”