After years of letting its influence wane in the Middle East in favor of graciously helping out poor people—and thereby winning hearts and minds—with laser-guided precision in Central Asia, the United States of America is renewing its focus on Iraq and surrounding countries.

United States Secretary of Defense Mark Esper said at a press conference, “The current administration and I both believe that the United States needs to return to focusing on its core competencies.  On the monetary side, we’re really doing well in spending—I mean, $1 trillion down the hole in 10 months is a real feat of financial strength, and I expect we’ll do even better in the months ahead. But the President contacted me, and noted that there has to be some way that we can really stimulate the economy even more. And that’s when I realized—nation building! We’ve been so focused on all the day-to-day tit-for-tat stateside that we’ve lost sight of the purpose of our military. The entire phrase ‘to support and defend’ is synonymous with ‘nation building,’ and we’ve lost sight of that important fact.”

Esper went on to say that he has talked with the current administration, and that there’s agreement on all sides that the United States’ involvement in the Middle East never has unexpected consequences, and typically creates thriving democracies that love America.

In an unusual turn of events, former presidential candidate Hillary Clinton spoke up on twitter, tweeting a long thread, part of which read, “This is the first thing that I’ve seen the Trump Administration get right, but if he thinks that he’ll make a difference just by lobbing a few thousand disposable troops at Iraq and precision-guided bombs at some Iranian general, he’s got another think coming. Until the hills are teeming American troops in Syria, the Middle East and Asia have no hope of peace. None.”

The President himself held a live, weaponsfire-side chat, during which he attempted to address Americans while also rampantly tweeting at the same time.

“My fellow Americans, and also Do-Nothing Democrats, today I have great news, maybe even the best news, some tell me even ever. After consultation with my top generals and admirals, and top Air Force people, and they are very smart, let me tell you, and I know, as a person who has a very high IQ when I see a smart person, and they tell me that nation building in the Middle East is basically like playing with Lincoln Logs for us. And even Lyin’ Hillary is saying that this is the right thing. And let me tell you, I have never seen this much agreement, on both sides of the aisle. It’s just all the agreement. And everyone tells me that nothing unexpected ever happens or has ever happened from this great country being great in the Middle East, too.” 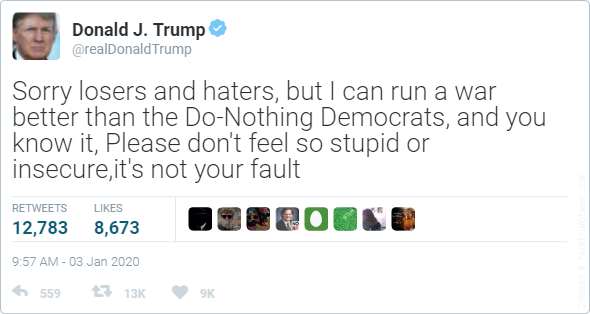 As Trump continued his speech, he launched into an explanation of how it was easier to kill an Iranian general, who he described as a “real sissy, a dog,” than it was to win at Whack-a-Mole. His chat was then cut short by a phone call from the Pentagon, informing him of a new terrorist who had arisen to fill the power vacuum created by the death of General Soleimani.

Given that both Democrats and Republicans were of one accord about this matter, I reached out to contrarian libertarian Nick Gillespie of Reason Magazine for his thoughts and perhaps an opposing viewpoint.

“Well, Lucas,” he said over the phone with a gravelly laugh, “During the chat with the nation this morning, the President said, ‘And they say that the best thing about endless wars is that you can make endless dead war heroes,’ and he’s right about that. I guess the silver lining is that each one is a little less memorable than the one before, and maybe hurts a little less to lose—oh wow, I have the national debt clock open and it just ticked up another trillion!”

I’ll continue to report on the resurgence of the red, white, and blue abroad as things develop.